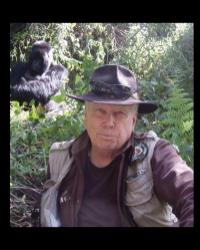 Dr. John Alexander has been a leading advocate for the development of non-lethal weapons since he created renewed interest in the field starting in 1989. In 2003 he served as a mentor to Afghan Ministry of Defense senior officials through the Office of Military Cooperation – Afghanistan, (Coalition Forces) Kabul. He has traveled to all eight (yes, 8) of the continents on Earth. He trekked the remote areas of Tibet including the Mount Everest Base Camp, went to Timbuktu in the Sahel in West Africa, tracked gorillas in Rwanda, met shamans in the Amazon, Mongolia and voodoo witch doctors in Togo and Benin, traveled across cartel controlled areas of Central America, visited ancient temples in Burma, Laos, Thailand, and Cambodia.  In New Guinea, he witnessed the emergence of stone-aged tribes people who still practice cannibalism on occasion, and in 2014 was swimming in the open ocean with humpback whales in the Kingdom of Tonga. In 2015 we attended Kumbh Mela in Nashik India, visited Bali and Borobudur in Indonesia and was diving on the Great Barrier Reef off Australia. In 2016 a highlight was diving with Great White Sharks off Isle de Guadalupe, Mexico.

He entered the US Army as a private in 1956 and rose through the ranks to sergeant first class, attended OCS, and was a colonel of Infantry in 1988 when he retired. During his varied career, he held many key positions in special operations, intelligence, and research and development.  From 1966 through early 1969 he commanded Special Forces “A” Teams in Vietnam and Thailand.  His last military assignment was as Director, Advanced System Concepts Office, U.S. Army Laboratory Command.  After retiring from the Army, Dr. Alexander joined Los Alamos National Laboratory where he was instrumental in developing the concept of Non-Lethal Defense.  As a program manager, he conducted non-lethal warfare briefings at the highest levels of government including the White House Staff, National Security Council, Members of Congress, Director of Central Intelligence, and senior Defense officials. He also met with heads of industry, presented at academic institutions, including Columbia, Harvard and MIT. In 2004 he was invited to address the German Bundestag. In 2005 he went to The Hague and addressed international delegates to the Chemical Warfare Convention. Later his civilian U.S. Government position afforded him Senior Executive Service (SES) equivalency.

Dr. Alexander organized and chaired six major conferences on non-lethal warfare and served as a US delegate to several NATO studies on the topic.  As a member of the first Council on Foreign Relations non-lethal warfare study, he was instrumental in influencing the report that is credited with causing the Department of Defense to create a formal Non-Lethal Weapons Policy in July 1996.  He was a distinguished guest lecturer at several DOD universities and has advised the CIA, US Special Operations Command, and the National Intelligence Council.

Dr. Alexander wrote the seminal material on non-lethal warfare.  He published articles in Harvard International Review, Jane’s International Defense Review, The Boston Globe, The Futurist, The Washington Post, and several other journals. He has appeared frequently on television including Dateline, Fox News, Larry King, CNN, MSNBC, Newsweek, and other US programs plus international television in Australia, Denmark, France, Germany, Italy, Brazil, Switzerland, the Netherlands, the UK, and Japan.

Academically, he holds a M.A., Pepperdine University, Ph.D., Walden University, and later attended the Anderson School of Management at UCLA, the Sloan School of Management at MIT, and the Kennedy School of Government general officer program “National and International Security for Senior Executives” at Harvard University.  In addition to many military awards for valor and service, Aviation Week & Space Technology selected him as a 1993 Aerospace Laureate and in 1997 inducted him into the Hall of Fame at the National Air and Space Museum in Washington.  He received a Department of Energy Award of Excellence for the Nuclear Weapons Program in 1994, and is listed in Who’s Who in America, Who’s Who in Science and Engineering, American Men and Women of Science, and in 2001 was named to the OCS Hall of Fame at Ft. Benning, Georgia. During 2001 and 2002 he was a member of the National Research Council Committee for Assessment of Non-Lethal Weapons Science and Technology, and he served with the Army Science Board. For a recent decade, he was a Senior Fellow at the Joint Special Operations University and in 2012 he received a Knowlton Award from the Military Intelligence Corps.