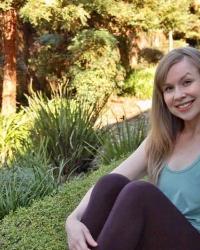 Clarissa Hidalgo (RYT 200)
Clarissa received her yoga teacher certification in the Spring of 2017. She began practicing after being treated for Relapsing-Remitting Multiple Sclerosis in 2010 ,and experiencing mobility issues in 2012. Since the beginning yoga benefited her physically, yet since her training she realized the various emotional, mental, and wellness benefits of her practice. Receiving her BA in psychology from the University of California, Merced in 2012, she was not only able to incorporate and recognize the various benefits of yoga physically and mentally, but tap into the mindfulness and self-healing powers as well.