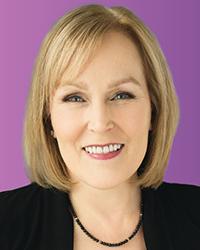 The “Vibration of Change”—that magical place where life shifts from struggle to ease…from stagnation to forward movement…from old ways of being to new ways of becoming.

Christine Upchurch, M.S. is a bestselling author, TEDx speaker, workshop leader, Vibration of Change™ creator and coach, spiritual myth buster, healer, and host of the nationally syndicated The Christine Upchurch Show now in its ninth year. She has been a featured guest on radio shows across North America and has taught thousands around the globe.

Christine is a former statistician who has applied statistics within the fields of engineering, telecommunications, psychology, and medicine. For several years she designed and analyzed clinical trials in cancer research at one of the most distinguished cancer centers in the world, helping to evaluate new cancer treatments as well as to quantitatively assess the quality of life for those undergoing treatment. In this role, she co-authored several articles which have been published in peer-reviewed medical journals.

Years ago, Christine herself faced the early stages of cancer, and doctors had nothing immediately to offer her as treatment. Instead of waiting to begin the plan of what ultimately would become indefinite chemotherapy, Christine decided to explore alternative options. She shifted her life in a variety of ways, and eventually the cancer disappeared. This health crisis, which she considers to have been a "gift in disguise," served to expand her belief system as well as to redirect her professional path.

Christine ventured into the realm of alternative healing, and eventually had the honor of being one of only four instructors teaching Reconnective Healing to new practitioners around the world. She then went on to co-create and teach transformational processes which have been called “profound” and “life-changing.” As a healer and teacher, Christine has touched the lives of thousands across the globe.

Christine has had the privilege of being on the other side of the research equation, as she herself has been a subject of scientific research evaluating the effects of energy healing. She participated in multiple studies conducted by the University of Arizona, the William A. Tiller Institute for Psychoenergetic Science, and St. Petersberg University in Russia. In these studies, scientists evaluated the effect that healers can have on various endpoints: damaged DNA, coherence, extremely low-frequency vibration, entropy, psychic imprinting, the light in clients' energy fields, and clients' range of motion. Christine is grateful to have been a part of ground-breaking research showing the powerful effects we can have on our world and those around us by working with subtle energy.

After being in the field of energy healing for more than a decade, Christine began seeking additional ways to help empower others on their journeys. Having developed a deep understanding of the energetic nature of change, she created The Vibration of Change™, which synthesizes various approaches to change into a single unifying model. The Vibration of Change provides individuals with a new type of personalized road map for creating positive, lasting transformation. She teaches this in workshops and offers it in coaching.

Christine is passionate about contributing to the lives of others in additional ways as well. She hosts her own radio show and also blogs about a range of topics, from ways to "get real" about our spiritual nature to sharing her perspective about the global shift underway. Recently she has been reexamining some of the beliefs within the consciousness community. In that vein, she is a contributing author to the book Love Is All There Is: The Importance of Transcending Spiritual Clichés and Living Their Deeper Wisdom (published July 2019) and is the sole author of The Top 20 Myths about Spirituality (to be published in 2021). She also has the honor of being the host of the 2021 Nautilus Book Awards Author Spotlight Series.