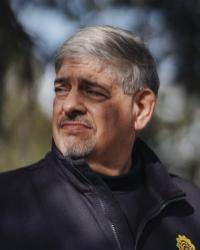 A Medal of Valor recipient, Kiwanis Officer of the Year and other commendations, Chris took on some of the toughest high-profile cases and solved them.  Since retired, Chris, once a skeptic in the UFO world, joined MUFON. He became a Certified Field Investigator and followed the evidence to become an alarmed believer and took on the cases of the unknown in New York. He then became the Chief Investigator and is now State Director for MUFON, New York.

“We need to be researching them, because they are researching us”. Chris is on that quest to solve the biggest investigation he has ever done.

Are we alone in the Universe?  What is flying around in our skies? What is happening to people who have been abducted? What does our government know and what are they hiding?

Chris opened the forum through radio with the Project Aries show, and now with MUFON and his cohosts, the two Katies, the What’s Up Show are on the hunt to answer that important question... Are we alone?

Chris and MUFON uncover the truth. Find out what’s really happening with these investigations on The Transformation Network’s The Psychic and The Doc.