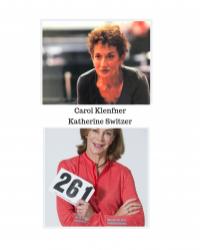 Carol Klenfner is a ping pong athlete who will be competing at this year’s National Senior Games in Albuquerque. She only just took up the sport in 2016, but quickly found success. Carol currently holds three gold medals from the Empire State Senior Games (women’s singles, women’s doubles, mixed doubles). Carol is also on the board of the AYTTO (American Youth Table Tennis Organization), a not for profit dedicated to bringing the egalitarian sport of table tennis to middle and high schools in New York City

Kathrine Switzer will always be best known as the woman who, in 1967, challenged the all-male tradition of the Boston Marathon and became the first woman to officially enter and run the event. Her entry created an uproar and worldwide notoriety when a race official tried to forcibly remove her from the competition. The photo of this confrontation flashed around the globe and became one of Time-Life’s “100 Photos that Changed the World.” Switzer finished the race but was radicalized by the incident and was determined to create change for women. Now, four decades later, the incident continues to capture the public imagination and is largely the reason Switzer has dedicated her multi-faceted career to creating opportunities on all fronts for women. Switzer has run 39 marathons, won the 1974 New York City Marathon and in 1975, her two-hour and 51-minute marathon in Boston was ranked sixth in the world and third in the USA in women’s marathon. She is still running marathons today – including returning to the Boston Marathon in 2017