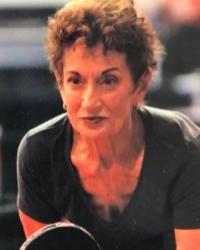 Carol Klenfner is a ping pong athlete who will be competing at this year’s National Senior Games in Albuquerque. She only just took up the sport in 2016, but quickly found success. Carol currently holds three gold medals from the Empire State Senior Games (women’s singles, women’s doubles, mixed doubles). Carol is also on the board of the AYTTO (American Youth Table Tennis Organization), a not for profit dedicated to bringing the egalitarian sport of table tennis to middle and high schools in New York City.