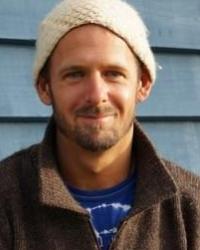 Bob Hillary is a young musician and writer, and this is his first book. He is signed to a well-known record label and has released 4 albums to an International fan base. He is a regular blogger with a loyal following and also writes articles for Kindred Spirit. He has played at Glastonbury festival and tours the alternative, spiritual music festival scene in New Zealand, Australia and Europe. Bob spent a year living off grid and it is this experience that formed the basis for his book.

Having previously lived in a busy city for 10 years working the 9-5 lifestyle & fronting World Roots band THE RUFFNESS, Bob experienced serious illness in the form of M.E, and was forced to change how he was living. He moved out of the city to a rural farm, & took decisive actions to change his lifestyle. Grounded, beautifully simple folk songs were born as the fruit of this move - and the album SIMPLIFY was recorded in an analogue studio on a farm in Somerset, produced by Real World Studios producer Ben Findlay (Robert Plant/ Kasabian) & the Album soon caught the attention of the Big Chill Records, & is being released into the world in 2020. His new book, also titled ’Simplify’ but with the sub-title ‘How to Stay sane in a World going Mad’ - which Bob describes as a 'Spiritual Survival Guide for how to stay sane & THRIVE in these somewhat confusing times we are living in’ - is being published by Watkins Books in the spring of 2020