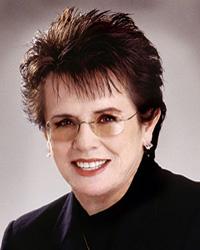 Billie Jean King - Visionary. Innovator. Champion.
As one of the 20th century's most respected and influential people, Billie Jean King has long been a champion for social justice and equality. She created new inroads for both genders in and out of sports during her legendary career and she continues to make her mark today. Among her many accomplishments are:

In 2008 King authored Pressure is a Privilege: Lessons I've Learned from Life and the Battle of the Sexes to commemorate the 35th anniversary of her historic 1973 match against Bobby Riggs.

Was 1 of 9 players who broke away from the tennis establishment and accepted 1 contracts from tennis promoter Gladys Heldman in Houston. The revolt led to the birth of women's professional tennis and the formation of the Virginia Slims Tour and Women's Tennis Association.

Empowered women and educated men when she defeated Bobby Riggs in one of the greatest moments in sports history the Battle of the Sexes in 1973. This match is remembered for its effect on society and its contribution to the women's movement.

Named Global Mentor for Gender Equality by the United Nations Educational, Scientific and Cultural Organization UNESCO in 2008, received the NCAA President's Gerald R. Ford Award in 2009, honored
with Major League Baseball's Beacon of Change Award in 2010 and appointed to the President's Council on Fitness, Sports and Nutrition in 2010.

Continues to be a leader in the fight for equality and recognition in the GLBT community, and has been honored by many of the leading GLBT organizations, including the Human Rights Campaign, GLAAD and Lambda Legal Foundation.

Honored on August 28, 2006, when the National Tennis Center, home of the U. S. Open, was renamed the USTA Billie Jean King National Tennis Center in honor of King's contributions to tennis, sports and society both on and off the court. She continues to be involved with the USTA and is currently Honorary Chair of the Tennis in the Parks Committee.

Currently serves on the boards of the Women's Sports Foundation and the Elton John AIDS Foundation.