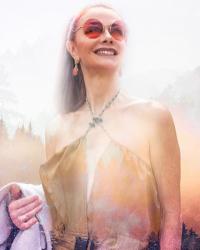 With a strong track record in retail marketing, operations, brand-building, and luxury goods - - with a passion for health, beauty and the finer things life has to offer - - Barbara Scheidegger has positioned herself well to assist high-end clientele and those brands who serve them.

Born in Winterthur, Switzerland in the Canton of Zurich, Barbara grew up in the service industry. At a young age, Barbara helped her engineer father build and run a dry cleaning business.  As a young woman, Barbara ventured on her own to study French in Geneva. Her interests led her to study child psychology, eventually landing her in a management role at an orphanage. After her studies concluded, Barbara moved to Biel, Switzerland to run a kindergarten.

Barbara married and moved in 1986 to the U.S., where she and her husband opened their first watch store. Two years later, they opened Westime in the Westside Pavilion, a Los Angeles retail staple wedged between Beverly Hills and Santa Monica. They would open three more locations throughout the next 15 years, including their flagship store on Rodeo Drive. Barbara would help build Westime into one of the world’s most exclusive, relevant and successful watch retailers.

After 25 years, Barbara turned over her end of the business to her son. Westime is still capitalizing on the foundation Barbara built, continuing to expand its reach and success.  Having managed all of the stores and having led marketing and operations across the brand, Barbara not only built a sterling reputation for Westime, but for herself as well. Her proficiency in managing employees and vendors; time and organization; buying and merchandising; marketing, events and promotions - - along with her entrepreneurial spirit and vast array of professional contacts - - steered Barbara to launch her retail consultancy B Seven Nine, which remains active today.

Barbara’s latest business endeavor, Vie Sans Age, is the culmination of her deep understanding of the high-end consumer and her insatiable appetite for health, beauty and self-improvement. Vie Sans Age (Life Without Aging) is a health and beauty consortium, where those who wish to maintain their youthful appearance and essence, receive expert care and guidance through a process of improving the health of their minds, body and spirit.

Ever a deep-thinker with incredible empathy, Barbara’s magnetism is amplified by her ability to communicate with people. She speaks five languages, including English, French, German, Armenian, and Italian. Barbara is as proficient as she is passionate about her personal interests, like ballroom dance (the Argentinian Tango,) snow skiing, yoga, weightlifting, and mountain climbing (she climbed Matterhorn in 2005). Barbara’s curiosity about the human experience - - about how their bodies and minds work - - drives her both personally and professionally.

On a personal level, Barbara has a penchant for art, music and interior design. She eats out as much as she can, but watch out, Barbara is an avid and adept food critic. Her palate is intrinsically connected to her pen, and she enjoys sharing her sophisticated and poignant opinions in food and lifestyle blogs.  Barbara volunteers at Hospice, in between spending time with her two children, Jennifer and Gregory… and her loyal Tabby, Simon.