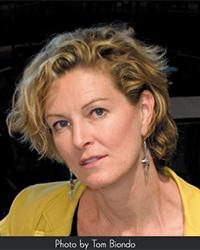 Anne Patterson of Patterson Design is an artist and highly successful businesswoman whose artistic focus is the creation of massive installations that have been the centerpieces of many major orchestral, operatic and theatrical stages; religious institutions; and museums across the country from the Kennedy Center to the Arena Stage to San Francisco's famed Grace Cathedral.

Stephen Sondheim said he was "knocked out by Patterson's visuals" and so apparently are the many who clamor for her installations - in the last year alone, the Pittsburgh Symphony, San Francisco Symphony, Bard Music Festival; the Frick Museum; there are possible upcoming engagements at New York's Metropolitan Museum of Art as well as at The Cathedral of Saint John The Divine, the world's largest cathedral, also in New York City.