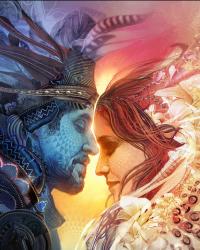 Android Jones’ pictorial work is one strain of a larger project that he calls “Electro-Mineralist Art.” Moving “beyond the traditional organic vegetable and animal technologies of pencils, ink, and brushes”, Android takes up emergent technologies that are crystalline, metallic, electronic and digital in their materiality and aesthetic feel, implicating a historical scheme that echoes the integral view of planetary evolution from physiosphere to biosphere to noosphere to theosphere; where the techno-media of exhibition artworks have been, by and large, as the artist says, bound to or associated with the biologic.

Android is classically trained in academic drawing and painting and this traditional art background is the foundation through which he bridges the knowledge of the past and brings it into the future. For a post-postmodern art of high noospheric and theospheric expression, Android instead upgrades to more resonate noospheric vehicles; where the crystalline or “mineralist”, proper to the physiosphere, is recovered as a marginalized inorganic principle for the artistic celebration of the energies of life.

The content of these marvelous works ranges vastly from the kosmic to the micro, from tantric beloved to sacred civics, from expansions of consciousness to reconfigurations of our three bodies. The pictorial syntax is at the very least proper to a teal register; a collage mode descending from synthetic cubism. Subtle radiance and causal voids abound throughout.

Honoring the history of art, the mystical projects of the later Dali come to mind, Android taps into pre-modern, modernist, and post-modernist aesthetic idioms, advancing an Electro-Mineralist Art as Integral Alchemy.Michael Schwartz – January 2014