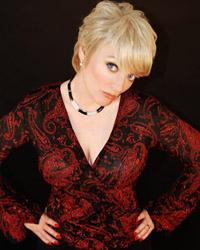 Alison Arngrim, best known to viewers world-wide for her portrayal of the incredibly nasty "Nellie Oleson" on the much loved, long running hit television series "Little House On The Prairie," continues to amuse audiences through her many film, television and stage appearances. In addition to her seven years on "Little House," Alison guested on such cult classics as: "The Love Boat," "Fantasy Island" and the NBC movie of the week, "I Married Wyatt Earp," starring Marie Osmond. She mocked her own status as an "ex-child star" on Jay Leno's Tonight Show, during their month long parody, "Hollywood Survivor" and continues to be a frequent interview subject on everything from "A&E", "E Entertainment", "TV Land" and "VH-1", to CNN and the Travel Channel. As a stand-up comedian, Alison has headlined at nightclubs such as the Laugh Factory, the Comedy Store and the Improv in Los Angeles; as well as the Cutting Room in New York and assorted comedy venues all across the United States and Canada.