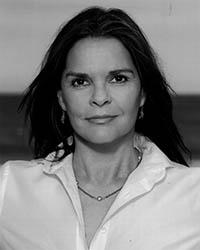 Ali MacGraw was born in Westchester County, New York and attended Wellesley College where she studied art history, languages and literature.
She began her professional career as Diana Vreeland's assistant at Harper's Bazaar. After leaving Harper's Bazaar, she went to work as a stylist for photographer Melvin Sokolsky in New York for six years.


Ali's acting career began when producer Stanley R. Jaffe and director Larry Peerce offered her the leading role of Brenda Patamkin in the screen version of Philip Roth's short novel, Goodbye Columbus. The movie was an international success, opening to tremendous popular and critical acclaim. Wanting her next film to be something special, Ali looked for a script that touched her on a personal level. That picture was Love Story and it proved to be her major break. An original screenplay and later a best selling novel by Erich Segal, the film earned Ali international fame, an Academy Award nomination, a Golden Globe award, and many additional honors worldwide.


Ali's third picture, The Getaway, co-starring Steve McQueen, completed her trio of blockbuster films. Nevertheless, after The Getaway, Ali took a five-year hiatus from Hollywood to raise her son Joshua. She returned to the screen to co-star in Sam Peckinpah's Convoy with Kris Kristofferson. Other film credits include Players co-starring Dean Paul Martin, and Just Tell Me What You Want, directed by Sidney Lumet and co-starred Alan King and Myrna Loy.


Ali has appeared in a number of television projects, starring in Herman Wouk's epic mini-series, "The Winds of War," with Robert Mitchum. In addition, she guest-starred for a season on the popular ABC-TV series, "Dynasty."


Ali published her autobiography, Moving Pictures, Bantam Books and watched it climb the New York Times Bestseller List. The book went on become an international bestseller in England, France and South America. She also teamed up with Warner Home Video to distribute an instructional yoga video called "Yoga Mind & Body." The video features respected yoga instructor Erich Schiffman. It was filmed in beautiful Whites Sands, New Mexico and remains popular in the U.S. and in Europe selling over 500,000 copies.


Ali currently lives in New Mexico. She travels extensively, appearing in documentaries and working on behalf of numerous social, animal and environmental causes including the Humane Society of the United States, Animal Protection of New Mexico and a number of specific animal sanctuaries. She is actively involved with the Santa Fe Rape Crisis and Trauma Treatment Centre, the Lensic Theatre for the performing Arts, Santa Fe Pro Musica, the Tibetan Centre of Santa Fe, and many other New Mexico non-profits. She received the Luminaria Award in 2008 from the Santa Fe Community Foundation, and the Governor's Award for contribution to the Arts in the same year.