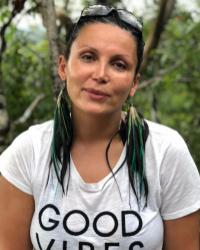 AÏDA has been a devoted Spiritual seeker and energy worker since birth. As an Empath, and a STARSEED at the age of six she experienced a clear intuitive transmission of having been on this planet once before; that prior to birth there was a council and one had to choose their attributes that would assist in completing her overall mission; they also clearly said that it would not be easy.

Years later, her interpretation of her mission lead her to 23 years of service in the Canadian Armed Forces, with tours in Bosnia, Afghanistan and a private contracting gig in the UAE before being released at the Rank of Captain in April of 2014.

With the unexpected termination of her employment a deep state of depression ensued. Her nervous system started to shut down from unprocessed traumas, grief, loss of identity, deep seeded belief systems coupled with unattended physical injuries that caused great physical pain for the next 5 years. Feelings of shame in having failed her existence, an earlier decision was made to check out from this planet. And it was through those dark times that another very clear transmission was received as in childhood... “THE WAR IS WITHIN”.

Being a Bi-Racial child of immigrants to Canada, Aïda had the opportunity to travel and or work in over 42 countries in the world. Having her BA in Film Studies, a diploma in Audio Engineering, her life experiences alone allows her to bridge soulful connections with those who come in contact with her. She provides a safe and inclusive space, where Ascension Transformations can take place. Her passion and love for Humanity continue, but are now focused in a new light.

Initiated into Shamanic studies of the Burkina Faso and Peruvian Traditions as a PACHAKUTI MESSA CARRIER, Aida’s work focuses on her unique modality of transmissions through “WORD”. Her “throat” CHAKRA has been fully activated and AÏDA is the conduit, a channel of the frequencies known as the “LIGHT LANGUAGE”.