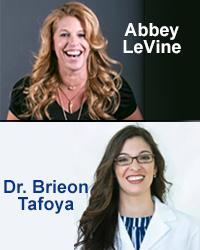 About Abbey -
Abbey LeVine is the Emmy-nominated Executive Producer and Director of the film whose workover the last two decades has been viewed by millions of people on major television networks, in theaters and online.

Throughout her career, LeVine has worked on a variety of documentary films and television programs where she has captured the personal perspectives of subjects in real-life settings, from celebrities to everyday working Americans.

She was recognized for her work in this area for Dr. Phil with an Emmy nomination. LeVine has an uncanny ability to relate to people of all walks of life and considers it an honor to be able to tell so many incredible stories.

LeVine is personally invested in the Clear the Air: Opening Up About COPD film as her mother is living with COPD. Knowing that there is growing population of people living with COPD, LeVine sought to humanize the disease and gain a better understanding of a patient’s journey.

Abbey partnered with Boehringer Ingelheim to direct the Clear the Air: Opening Up

About COPD documentary film to bring light to this often misunderstood and life-threatening disease that she has come to learn about personally.

About Dr. Brieon Tafoya -
Dr. Tafoya is a Pulmonologist at Dickinson Pulmonology Clinic in Iron Mountain, Michigan. She finds it important to empower her patients to be proactive in their own lives with their health.

Because COPD doesn’t always evoke the same compassion or interest as other diseases, she jumped at the unique opportunity to chronicle stories of people living with COPD in a film.

Dr. Tafoya began treating Mary for her COPD in 2014. From the start, she encouraged Mary to participate in pulmonary rehab and continue other proactive endeavors such as monthly pulmonary support groups.

Three years later, Dr. Tafoya continues to treat Mary for her COPD and has most recently encouraged her to attend a support group once a month for people living with COPD, which Mary attends regularly.

Dr. Tafoya is board certified in internal medicine, pulmonary, and critical care medicine. She is a member of the American Osteopathic Association (AOA), American College of Chest Physicians (ACCP) and the American Thoracic Society (ATS).